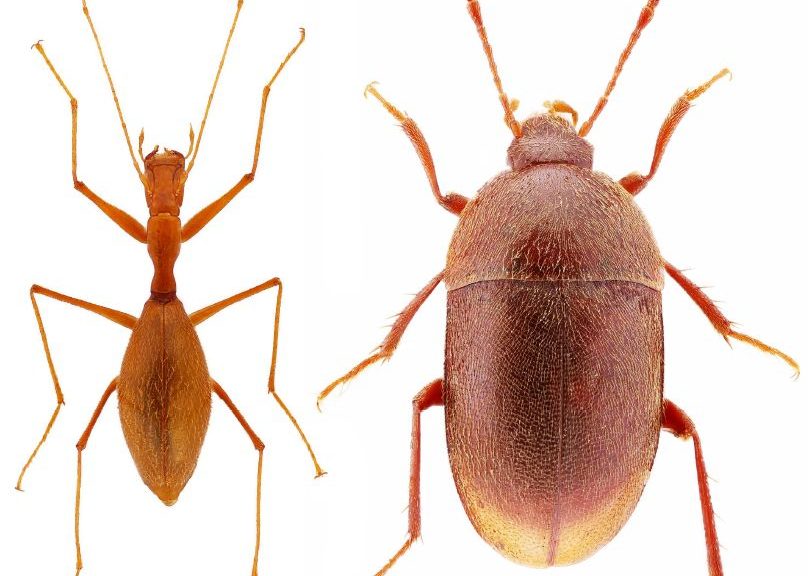 The genus Anthroherpon Reitter, 1889 exhibits the most pronounced troglomorphic characters among Coleoptera, and represents one of the most spectacular radiations of subterranean beetles. However, radiation, diversification, and biogeography of this genus have never been studied in a phylogenetic context. This study provides a comprehensive evolutionary analysis of the Anthroherpon radiation, using a dated molecular phylogeny as a framework for understanding Anthroherpon diversification, reconstructing the ancestral range, and exploring troglomorphic diversity. Based on 16 species and 22 subspecies, i.e. the majority of Anthroherpon diversity, we reconstructed the phylogeny using Bayesian analysis of six loci, both mitochondrial and nuclear, comprising a total of 4143 nucleotides. In parallel, a morphometric analysis was carried out with 79 landmarks on the body that were subjected to geometric morphometrics. We optimized morphometric features to phylogeny, in order to recognize the way troglomorphy was expressed in different clades of the tree, and did character evolution analyses. Finally, we reconstructed the ancestral range of the genus using BioGeoBEARS. Besides further elucidating the suprageneric classification of the East-Mediterranean Leptodirini, our main findings also show that Anthroherpon dates back to the Early Miocene (ca. 22 MYA) and that the genus diversified entirely underground.Biogeographic reconstruction of the ancestral range shows the origin of the genus in the area comprising three high mountains in western Montenegro, which is in the accordance with the available data on the paleogeography of the Balkan Peninsula. Character evolution analysis indicates that troglomorphic morphometric traits in Anthroherpon mostly evolveneutrally but may diverge adaptively under syntopic competition.